Home > About > Looking Back & Always Forward

LOOKING BACK AND MOVING FORWARD

Siempre Adelante – Always Forward. These words are what inspired our founding families over 20 years ago to persevere through all the challenges they faced as they worked to establish a much-needed Catholic elementary school in South Orange County. Their commitment and determination resulted in the doors opening to 250 students in September of 1995. Today, they are the very same words that continue to strengthen and motivate us. St. Junipero Serra Catholic School now serves over 1,000 students and remains a leading, Catholic faith-based school in the Diocese of Orange.

At St. Junipero Serra Catholic School, we seek to provide our students with a moral center, a values-based education, and a challenging curriculum for all learners that nurtures curiosity and inspires the love of learning through innovation, investigation and imagination.

In 1993, a group of concerned parents approached their Pastors about the feasibility of establishing a Catholic elementary school for their children. Although the Diocese had no plans in place to expand the school system in the Diocese of Orange, the parents assumed the responsibility of working closely with the Diocesan School's Office establishing the county's first and only tri-parish elementary school.

St. Junipero Serra Catholic School, which was the first new Catholic elementary school in Orange County in 15 years, opened in the fall of 1995 as Serra Catholic School. When SJSC opened, it had ten classrooms accommodating a total enrollment of approximately 250 students in grades Kindergarten through Sixth. Today, SJSC educates over 1,000 students in grades Preschool through Eighth.

In September 2003, SJSC opened its first permanent facility, the Primary Education Building (PEB), which housed students in grades Jr. Kindergarten to Fifth. By the fall of 2009, SJSC completed the second phase of development by opening their doors to the Middle Education Building (MEB), which now houses grades Fifth through Eighth along with the Student Activity Center (SAC).

As SJSC continued to grow, there was a great need to expand and offer families a preschool option. In September 2011, Serra Catholic School Preschool opened its doors on the grounds of Holy Trinity Church in Ladera Ranch. Due to the success of the Early Childhood Programs and to accommodate the growing needs, the preschool relocated to the main campus in the fall of 2015 and today continues to offer programs for three and four-year-old students that meet the unique requirements of every family.

On October 6, 2015, the priests from the four parishes the school serves, joined Bishop Kevin Vann celebrating Mass in honor of the 20th Anniversary and the canonization of Junipero Serra, which also culminated in the name change to reflect the sainthood of their patron.

Today, St. Junipero Serra Catholic School maintains to live by Siempre Adelante... always forward. SJSC continues to grow and anxiously awaits the completion of their sacred Chapel, Student Creation Center (our commitment to STEAM education and the Arts), which will complete the final phase of the school's structural development. A groundbreaking ceremony was celebrated by the Most Reverend Bishop Kevin W. Vann of the Diocese of Orange on Monday, April 3, 2017. Completion of this final phase of development is expected to be Summer 2018. The Chapel officially opened on October 6, 2018 when Bishop Vann returned to campus for the Chapel blessing and dedication. 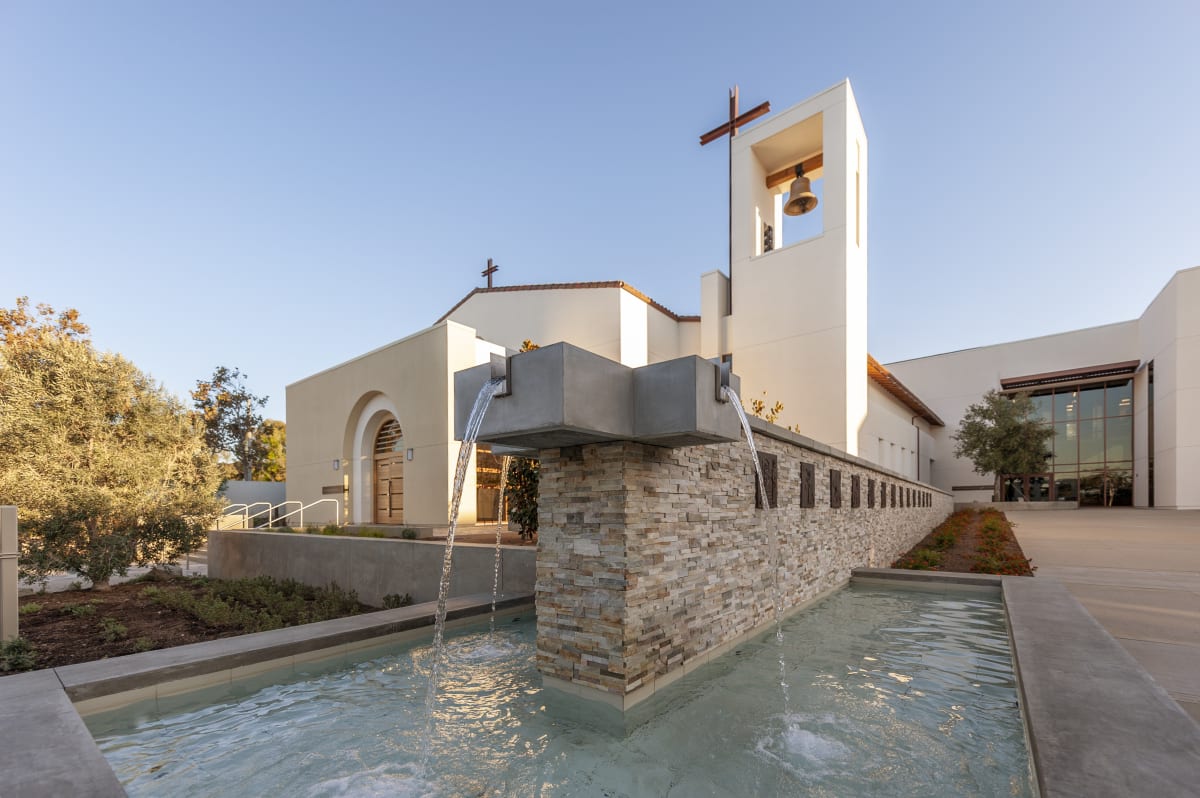 St. Junipero Serra Catholic School continues to remain faithful to their past, confident in their future, and steadfast as they move forward with and through Christ.